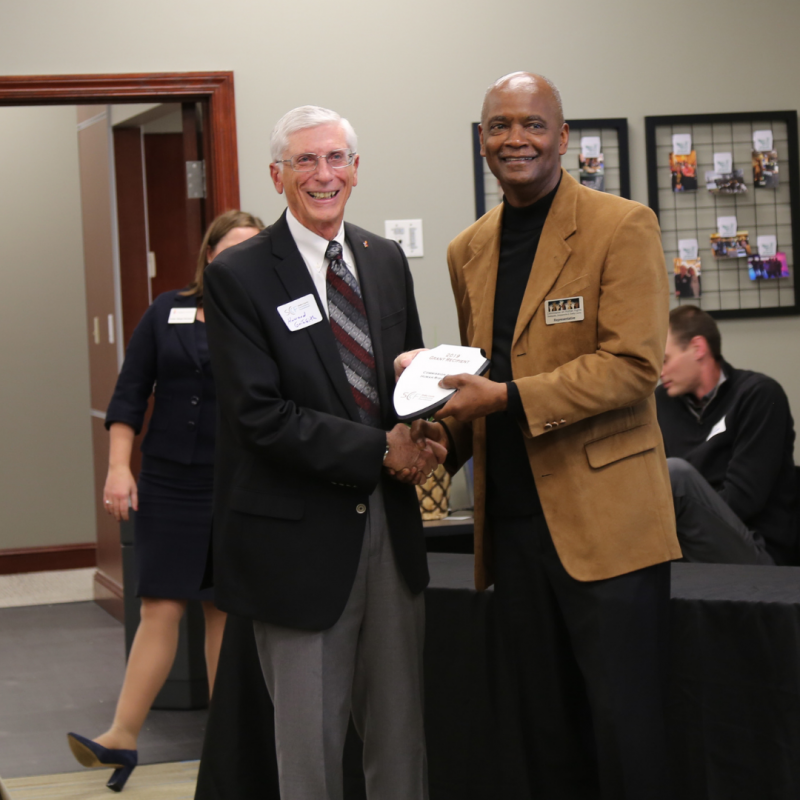 ‘I had tears in my eyes’

In a typical year, the Shelby County Community Foundation (SCCF) awards about $50,000 to $60,000 in grants to area nonprofits. Because the organization receives applications that far exceed that amount, tough choices must be made.

But recent anonymous contributions in the amount of $1.4 million has been donated to SCCF, a regional branch of the Community Foundation of Louisville (CFL). And now, according to Howard Griffith, longtime SCCF Board Chair, his dream of having enough money to more fully fund the needs of Shelby County nonprofits has come true.

“I’m personally invested in seeing these nonprofits succeed, so when I learned about the recent $1.4 million donation, I literally had tears in my eyes,” says Griffith, who has been with SCCF over 30 years. “I was overjoyed, because I know how hard these organizations work, how much enthusiasm there is, and how much passion they have for what they’re doing in our community.”

Griffith explains that the donation will go into the Partnership Grants Fund, which accepts annual grant requests from local nonprofits and awards an average of $55,000 a year, split up between about 12 to15 applicants. Now, thanks to this historic donation, the fund will be able to raise that number to an estimated $200,000 a year for the next 14 years.

“Which — wow — is just absolutely huge,” he says. “For a minimum of 14 years, an estimated $200,000 each year can be used to make grants to the incredible nonprofits that are working in our community to support those most in need of services.”

Griffith and the board also are working to ensure that the fund can continue to award grants at that level even after the 14-year mark through investments and projects already in the pipeline, thanks to philanthropic individuals who have already designated contributions through their estate planning.

“We’re grateful for these charitable gifts, which will have a huge positive impact in the community for the next several years,” she says. “We appreciate the donors’ trust in us to be a valued resource to the nonprofit community. It is our pleasure to work with individuals to support their charitable goals now, as well as work to support their estate plans and their lasting legacy as dedicated citizens of Shelby County.”

A Long History of Giving in Shelby County

The idea behind a Shelby County chapter of the Community Foundation first took root in 1990 with a $722,000 donation from Moses Rubin to be used strictly for Shelbyville nonprofits. Griffith was one of three people in charge of distributing those funds, and he’s been a part of the chapter since it officially formed in 1995. He’s proud of the work the organization has done in the budding community.

“Over the last 31 years, we have given back to the community well over $1.6 million,” he says. “We have funded more than 110 different nonprofits in the community with more than 425 grants.”

Griffith recalls a different Shelbyville when the foundation first began. The city was primarily an agricultural county seat town and just starting to develop. But shortly after, more and more businesses started to emerge.

“As the community started to grow, that meant that new people were coming in as businesses were established here. And as they came in, more nonprofits began emerging to address the needs in the community,” he says. “The first dollar a new startup nonprofit must get is the most difficult, because they are just getting established. That’s who we set out to help in the beginning.”

Since then, the community has grown leaps and bounds, and an interlocking web of nonprofits manifested to enhance the quality of life in Shelby County. A list of recent nonprofit beneficiaries includes Big Brothers Big Sisters, Shelby County Parks and Recreation, Red Cross, Shelby County Adult Learning Center, Hospice, The Street Ministry and many more.

The Shelby County Community Foundation will begin accepting grant applications now through July 6. And for the first time, applications can be filled out online at www.shelbyccf.org.

Griffith says he’s thrilled that there will be more grants awarded this year to more nonprofits than before. He believes this donation will help create an even better and stronger Shelby County.

“I think this is a very giving community,” he says. “It’s a place where people want to do whatever they can to help each other. That’s true of the nonprofit community here, too.”