Turney Berry has represented and has been counsel for the Community Foundation of Louisville for nearly 30 years. He has seen the Foundation grow and flourish over the course of three decades and consequently has a perspective of its success that dates back to the beginning.

Tell us about the origin of the Community Foundation of Louisville – what was the original mission? What do you think they were envisioning for the future?

Community foundations, even in the 1980’s, really were created with the same sort of vision that I think, at least, they would have today, which is they really exist to inspire, encourage, and facilitate philanthropy. These old community foundations – Cleveland, New York – had a very top down view. What donors around here want to do… we want to make our own decisions. And so what you find is, that if you facilitate people making their own decisions you will get a lot more philanthropy than you do otherwise. It’s so encouraging. And then people want to do what their friends and neighbors are doing so their friends and neighbors are being philanthropic. And that’s where philanthropy really gets rolling.

Do you find Louisville to be a community that cares?

I do. It’s interesting. I think that you have to work on it. You’ve got to have leadership. I don’t think it’s really true that one generation is more philanthropic than another. Part of it’s timing, but a lot of it is what do they want to do? How do they want to do it? At the end of the day, you can say, the groups that are helping are imperfect. Yeah, they are imperfect. Everything else is imperfect. So what? The cause is the key thing. And that’s what a community foundation is great for, because it’s raising money. Who’s going to lead, who’s going to inspire, if it’s not the Community Foundation? It’s reminding you that your causes – the causes you see around you, the causes of your friends and neighbors – that’s what’s important. That’s why we’re here.

What sort of impact can a single individual make?

It all starts with individuals. Any amount of good is still good. But, even more than that, individuals have the ability to influence other individuals. That’s why generational giving creates such a large impact. Grandparents, and parents, and children come together and pool funds to do things over generations. It always starts with one person – you never know where your influence begins and ends. “ Philanthropy, compassion, community mindedness. They are what, I think, distinguishes vibrant communities.” 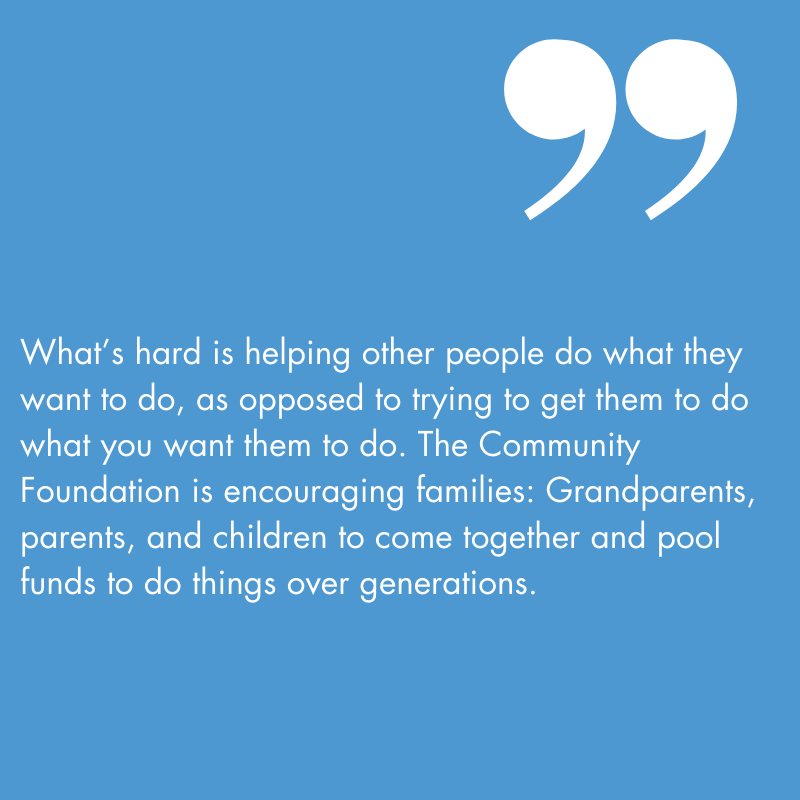 What would be missing from Louisville, in the philanthropic fabric of this community, if the Community Foundation here did not exist?

Do you think, at the heart, there’s a sense of wanting to make a lasting impact?

I think the answer is yes. Sometimes people think what that means is folks are looking to build themselves up with their legacy but I think most of the time it’s folks that say they’ve been blessed, and they think, “I’ve been very fortunate or very lucky. I want to put some of those chips back on the table. I’m going to leave them in the pot for somebody else to take who needs it more than my family does.”

You mentioned trends there. How do you see the Community Foundation adjusting to those philanthropic trends and innovating?

I have a view that all groups, if you don’t watch, will tend to shy away from what’s hard and shift to what’s a little easier. They don’t really notice that they’re doing that. They don’t make a conscious decision. Maybe we all do that, individually, truthfully. It’s not hard to get people to go to press conferences. It’s not hard to round up people to help with projects that have immediate rewards. What’s hard is helping other people do what they want to do and thinking about creating partnerships and collaborations. That’s hard, and it requires dedication. You do all of that for the long term: build up the Foundation to build up the community for the long term.

Why is the Foundation important to the growth and health of the community?

Philanthropically-minded, community minded people make our community better. The mayor talks about compassion. I think that’s just another way to say the same thing. Philanthropy, compassion, community-mindedness: they are what, I think, distinguishes vibrant communities that really have a lot to offer from an economic mill, or a self-satisfied place, truthfully.