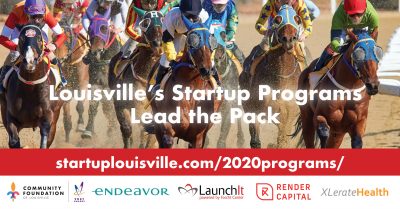 (Louisville, KY — May 5, 2020) Five community programs you should know that are serving entrepreneurs amidst crisis now have a single starting point for learning about and connecting with Louisville’s competitive business accelerator, funding, mentorship, and support programs — http://startuplouisville.com/2020programs/.
“We want founders to know that they should consider applying for every program for which they qualify,” said Mary Grissom, Senior Program Officer of the Community Foundation of Louisville’s Vogt Awards. “While each program is slightly different, you can apply to more than one for greater support.”
The programs, which range from seed funding competitions to full-blown accelerators, include:  Render Capital’s Competition, Community Foundation of Louisville’s Vogt Awards, Endeavor Louisville’s Scale Up, XLerateHealth, and University of Louisville’s LaunchIt. In addition to startuplouisville.com hosting data about each of the programs on their website, LEAP (Louisville Entrepreneurship Acceleration Partnership) is helping to inform the Louisville startup community about the collaborative effort.
“Our goal is to help early to mid-stage businesses leverage all of our community’s assets in order to provide a well rounded approach to supporting the startup community,” said Mary Tapolsky, Program Director for LaunchIt. “We know that those businesses that leverage support resources have a better chance of being successful. For LaunchIt, we have multiple competitive grants to help entrepreneurs access this training.”
“We are proud to debut Render Competition as a new funding opportunity for early stage startups and to work with other entrepreneur support organizations in our community to ensure success for startups in our region, even in uncertain times” said Marigrace Ragsdale, Associate at Render Capital.
Raechele Gray, manager of Entrepreneur Selection & Growth at Endeavor, said, “Although we just kicked off our regional Scale Up program providing personalized growth strategy and direct mentoring support for high growth entrepreneurs, it is important for founders to understand that as their business grows, their support needs evolve as well. Louisville has programs that offer support at every stage.”
While Scale Up’s program is currently underway, applications are now open for the Vogt Awards, Render Competition, XLerateHealth, and LaunchIt. Requirements, benefits, and deadlines for each program vary and can be found at http://startuplouisville.com/2020programs/.
XLerateHealth (XLH) is Louisville’s first and one of the nation’s longest standing healthcare accelerators. Founded in 2013, XLH exists to cultivate and grow impactful healthcare innovation across the Midwest, Southeast and other areas of the country where great innovation often goes unrecognized and underfunded. “Louisville is a great place to start and grow a healthcare business and we’re proud to call it our home and headquarters,” said Jackie Willmot, CEO and Co-founder of XLerateHealth. “Louisville is the birthplace and growing ground of healthcare behemoths such as Humana to successful startups such as Apellis and is home to a multitude of top-tier aging care organizations and research universities. We’re excited to see startuplouisville.com and LEAP’s collaborative effort to make more entrepreneurs and innovators aware of the great resources and support available to them in Louisville.”
THE PROGRAMS