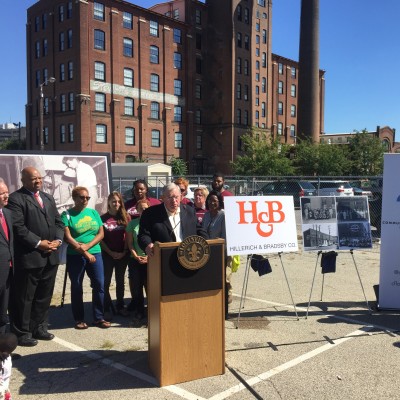 Louisville Slugger® manufacturer Hillerich & Bradsby Co. announced that it’s donating a two-acre parcel of land in Smoketown to the Community Foundation of Louisville. The property, valued at $1 million, will be used as part of The Wheelhouse Project – a community effort that will play a role in the significant revitalization taking place in the 150-year-old Smoketown neighborhood near downtown.

“It’s been a 43-year vision of my dad – our chairman, Jack Hillerich – who has always wanted to do something special with this piece of property,” said John A. Hillerich IV, H&B’s president and CEO, at a news conference held at the site. “We wanted something that could benefit the Smoketown community, but we weren’t sure of what that should be or how to make it come to life until we connected with YouthBuild Louisville, the Community Foundation of Louisville, Mayor Fischer and champions of The Wheelhouse Project Heather and Marshall Farrer. This is a true collaboration that will greatly benefit the people who live here.”

The Wheelhouse Project is designed for people who have lived in Smoketown for generations and who deserve a proper place to eat, green space for recreation, an improved quality of life and greater employment opportunities. The project also supports YouthBuild Louisville programs which champion young people to be great citizens who build productive lives and sustainable communities. Groundwork for the Wheelhouse Project was established by work from the 2014 ArtPlace America grant for the Smoketown Creative Innovation Zone.

“With these goals in mind, we’ll use the property H&B is donating to focus on how we can work with the people in the Smoketown neighborhood to connect the dots for what is right for this community,” said Susan Barry, Community Foundation of Louisville president. “We want to be sure there is the right combination of green space, recreation and local business in a way that creates a safe, healthy, creative community where residents can work and play. We’re delighted for the unique role the Community Foundation of Louisville can play in turning an asset like this into a positive community impact.”

Heather and Marshall Farrer and Dace Brown Stubbs have jointly committed $200,000 to The Wheelhouse Project, the Smoketown Neighborhood and subsequent YBL programs.

“Our family is committed to working with the historic Smoketown community to create a project that will effectively demonstrate that employment opportunity, art, culture and urban green spaces play a central role in shaping communities’ social, physical and economic revitalization,” philanthropist Heather Farrer said. “Our initial investment in the project and YouthBuild’s programming mark the beginning of a long-term and important partnership.”

“Millions of Louisville Slugger bats were made at this site over the decades,” Fischer said. “The Smoketown community and the old H&B factory site are great parts of our city’s history. We’re confident that what is developed here will become an important part of this neighborhood’s revitalization and sustainability. We’re grateful to H&B for donating this piece of land.”

Louisville Slugger® bats and Powerbilt® golf clubs were made at the Jacob and Finzer factory. Company records indicate the company moved to the location in 1901 and that more than 100 million Louisville Slugger bats were produced in the factory up through 1974. That includes bats Babe Ruth used to set his home-run records, ones Joe DiMaggio swung in his 56-game hit streak and bats Ted Williams used to hit .406 in 1941. The H&B factory and Smoketown neighborhood were visited by some of those great players as well. Hall of Famers Babe Ruth, Honus Wagner, Ted Williams, Bobby Doerr, Eddie Mathews and Yogi Berra visited to see how Louisville Slugger bats were made.

“This place is very special to the Hillerich family and H&B,” said company chairman Jack Hillerich. “This is where I first started working with my father and brother. I have many great memories. We believe the residents of this neighborhood will make many great memories here as well, while benefitting from all that will be in this space.”

“The development on this land is for the Smoketown neighborhood, so it’s important that we listen carefully to what the residents have to say,” John Hillerich said. “The Wheelhouse Project will be successful only if the residents have ownership in what happens here.” 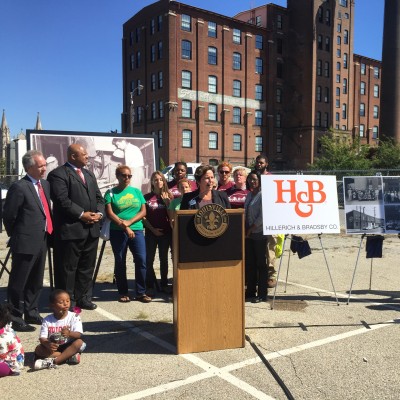 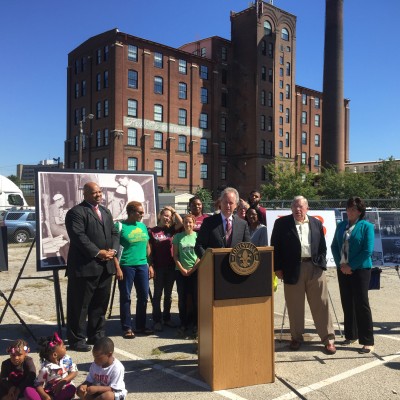 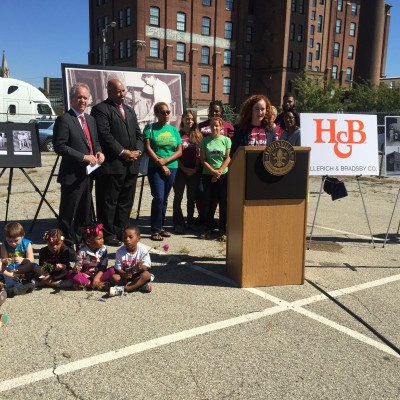 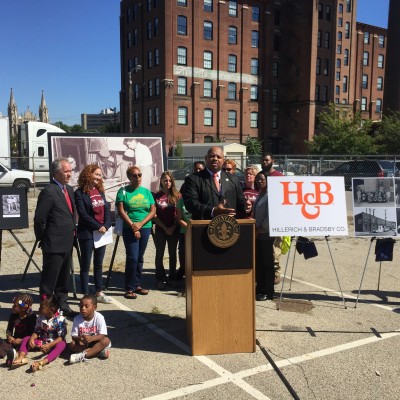