The Community Foundation of Louisville, in partnership with Louisville Visual Art, is pleased to announce that Louisville-based artist and printmaker, Adrienne Miller, is the winner of the fifth annual Mary Alice Hadley Prize for Visual Art. The $5,000 award is an opportunity for local artists to enhance their careers through a targeted enrichment experience of their own design.

Miller will use the prize to research the landscape and art historical influence of the Four Corners area of the American Southwest, an area that has served to inspire generations of artists. The two-week trip will cover close to 2,000 miles, exposing Miller to printmaking studios and The Georgia O’Keefe Museum and Archives, as well as pueblo ruin sites, national parks, energy vortexes and several large earth works in the region.

“I want the experience to be transformative and immersive so that I come away feeling as though the experience really was a tipping point for me,” said Miller of the Hadley Prize enrichment experience. “I want to return to Louisville renewed to create a whole new body of work.”

The $5,000 M.A. Hadley Prize is awarded from the George and Mary Alice Hadley Fund at the Community Foundation of Louisville. Focused on the arts and humanities, particularly visual arts, crafts, theater and the Louisville Free Public Library, the endowment has supported our community for more than 25 years.

The Hadley Prize is just one of the ways that the Community Foundation of Louisville is supporting our local artists. The Community Foundation is committed to creating lasting impact and building a community where people and place thrive. A thriving community is one that supports its artists, attracts creative professionals and nurtures cultural institutions, both new and established.

The Hadley Prize winner is selected through a blind process by a diverse panel of arts professionals from Louisville and the surrounding area. The 2017 prize drew 70 applicants from the greater Louisville area, including Southern Indiana, whose work demonstrated mastery in ceramics, graphic design, drawing, crafts, painting, photography, sculpture, video, film and printmaking.

“The selection committee was very impressed with Adrienne’s clear artistic vision and the unique nature of her enrichment experience,” said Lindy Casebier, Executive Director of LVA. “Her focus on landscape, both as a part of the American identity and as a driver of her own work, really stood out.”

Miller acknowledges the influence that landscape, land use and architectural domestic spaces have had on her own work and expects that the new geography of the Southwest will be an inspiration. “The history of landscape art plays a heavy influence on my own studio work, but I have yet to travel to this area of the United States,” said Miller. “I want to experience the permanent and impermanent at the same time…and I think seeking this out among ancient pueblo ruins and archaic rock formations is the correct place to do it.”

“The local artists competing for the Hadley Prize continue to impress us with their originality and passion,” said Susan Barry, President & CEO of the Community Foundation. “The prize focuses on a single artist, empowering them by investing in what the artist feels best serves them. By lifting our artists, we know that their gifts and talents will continue to influence, inspire, and empower others in our community.” 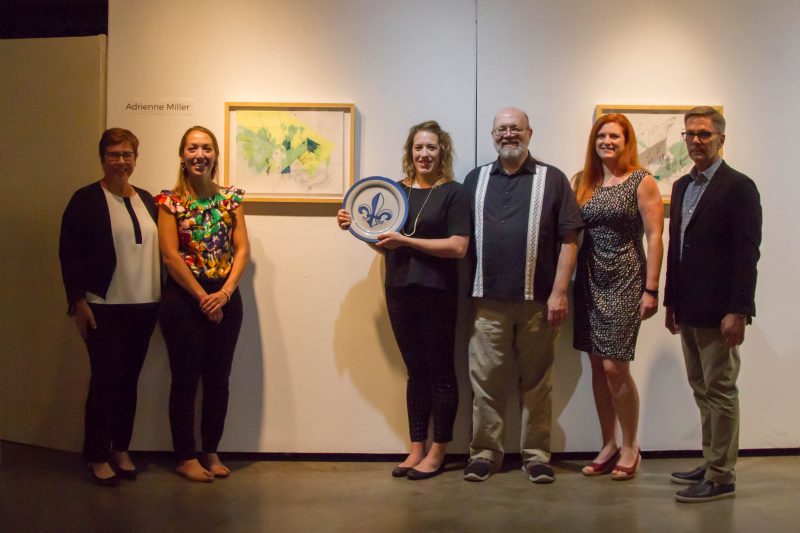