The Community Foundation of Louisville announced that on September, 15 2016, $4.15 million* was raised during Give Local Louisville for more than 600 local nonprofits that participated in the 24-hour day of giving. This is more than a $1 million increase over 2015 in just the third year of the initiative, solidifying its position as the biggest day of local giving in our community. Even more importantly, the number of gifts received through the initiative totaled 21,156; 12,371 more than last year’s total of 8,785.

“We are blown away by the number of donations that were made,” said Susan Barry, President and CEO of Community Foundation of Louisville. “For the third year in a row, we have seen this force for good grow in our community. When we come together with gifts big and small, we can make a major impact on our community.”

“We reduced the minimum donation to $10 this year to make the event more accessible, and the community responded so generously,” said Anne McKune, Program Officer, Community Foundation of Louisville.

A variety of nonprofit events took place around the community for Give Local Louisville, including a midday rally on 4th Street Live! where more than 200 nonprofits came together to build awareness, show support, and encourage others to donate. Mayor Fischer was in attendance to help energize the crowd and to thank them for their valuable role in the community. Check out some of the amazing photos from the rally on our Facebook page.

“We are thrilled with the support from our generous sponsors who helped stretch donations even further with $230,000 in cash prizes and incentives,” said Cara Baribeau, Vice President of Marketing and Communications for the Community Foundation of Louisville. “These incentives add to the excitement of the day and reward nonprofits for their hard work and outreach efforts.”

The winners of the prizes for Most Dollars Raised, Most Unique Donations and the Strategic Prizes are listed here. A complete list of the 30 Delta Dental Golden Ticket winners, each receiving a $1,000 boost to a randomly selected donation, is available here.

To learn how you can be a part of this force for good, visit www.cflouisville.org and www.givelocallouisville.org.

THANKS TO OUR SPONSORS 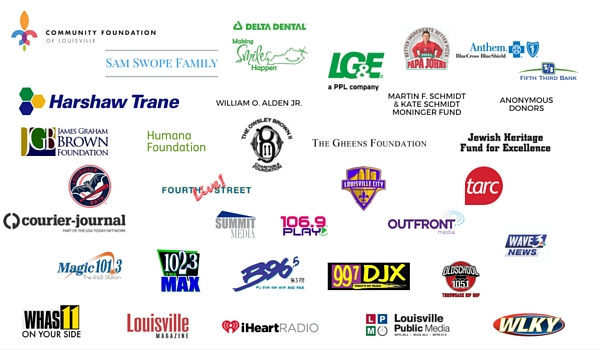